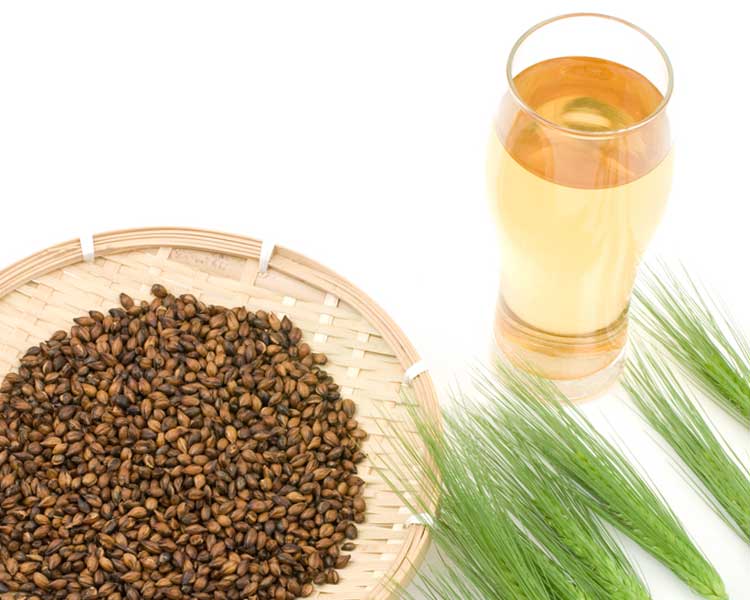 Easy to brew just like regular tea- but without the caffeine.

Barley tea or Kobashi Mugicha, contains a wide range of vitamins, nutrients and biological compounds that are credited for positive 7 benefits of barley tea. (Want some now? Buy Here>>)

Consumed in Japan and Korea for centuries, this drink has become a staple to a good Japanese healthy diet. Barley tea contains vitamins A and C along with antioxidants that help to eliminate free radicals and amino acids and melatonin that aid overall health. There are a variety of barley teas available for you to sample. Let’s see what the fuss is all about with our 7 benefits of barley tea: (FYI- see bottom of this page for more information about consuming barley tea.)

Barley tea may help in detoxifying your body in two ways. Barley tea contains a substance called pyrazine that prevents blood coagulation and helps in improving circulation. Secondly, it is great for your liver that helps in excreting all the toxins from your body. It also helps in breaking down the excess fat he body and thus allows your liver to function at its best.

2. Can help with weight loss

Barley tea is a naturally drink that can be a delicious alternative to plain water. It’s a great replacement for sugary drinks that can pack on the pounds; just make sure to limit the sweeteners. Barley tea’s low sugar content means diabetics can consume this tea without the worry of skyrocketing

The high fiber content of barley tea makes you feel full longer so you won’t have the urge to snack and consume unnecessary calories. Antioxidants in barley tea can boost your metabolism and help promote weight loss by reducing overeating.

One of the best things that you can do to help cure an infection is to drink a lot of fluids to flush out the bacteria from your system. Barley tea which is a combination of nothing but water and makes for a great drink that is free of caffeine and can be sipped safely through the day. Barley tea acts as a diuretic – which means that it causes increased passing of urine and thus, helps in eliminating the bacteria along with it.

The fibr present in barley and therefore, in the tea may help in regulating your bowel movements in some cases, may prevent constipation, or reduce a bloated stomach and keeps your gut clean. It also acts as a natural antacid and may help in relieving indigestion, heartburn or an upset stomach caused due to an imbalance in the gut acids.

4. Has a cooling affect

In Japan, barley is considered as a ‘yin’ food. This simply means that it has the potential to cool you from within and bring down your core body temperature. So, grab a tall glass of barley tea on a hot and humid day and feel rejuvenated instantly.

5. May help you sleep better

Barley tea contains melatonin and tryptophan, which are both active ingredients that promote good sleep. Also, since it is caffeine-free, you can have it before you hit the bed and not worry about your sleep being disturbed. But, remember that moderation is the key.
Barley tea contains melatonin and tryptophan that promote good sleep.

Barley tea contains large amounts of Vitamin C that can help protect your immune system from diseases and shorten the duration of the common cold and flu. Vitamin C helps to increase the production of white blood cells, which makes it easier for your body to fight infections (2).

Barley tea also contains antioxidants that eliminate free radicals that cancause cell death, which leads to premature aging and serious illness tea including quercetin, which prevents oxidation that causes cell death. These phenols work specifically to destroy peroxynitrite, which has been tied to both cardiovascular and neurological diseases (3).

Barley tea is rich in antioxidants and has anti-bacterial properties too. This makes it a great home remedy for cold and flu. It breaks up the phlegm and relieves you from congestion and even cures a sore throat. At the same time, it also helps in building up your immunity and makes you stronger from within.

Barley tea contains antioxidants and polyphenols that can prevent teeth from decaying. These compounds also help to protect teeth from plaque build-up that can lead to cavities. This is not a substitute for daily brushing or seeing a dentist, just a measure of care.

A 2007 study published in the Journal of Agricultural and Food Chemistry found that beverages made from roasted barley had antiadhesive properties that can protect against plaque and prevent tooth decay. The study used ceramic beads to mimic tooth enamel and applied oral streptococci to the surface to study bacteria growth. The ceramic beads treated with a coating of roasted barley showed lowerrates of bacteria growth (5).

attributed the positive antibacterial properties to melanoidin and other polyphenols found in roasted . It’s important to note that the study did not find in unroasted barley grains, so it seems the powers of barley tea come from the roasting process seeds.

Side Effects of Barley Tea

Unlike the dangerous side effectsassociated with barley water made from flour, barley tea is a mild has few side effects when consumed in moderate quantities. However, there are still a few precautions when it comes to consuming in tea.

If you suffer from Celiac disease, have gluten sensitivity or are allergic to grains, it’s best to avoid barley tea. Some blends of barley tea also contain corn, so if you have an allergy to corn it’s a good idea to avoid drinking barley tea.

If you are pregnantor breastfeeding, it is also best to avoid barley tea since it lactation and cause complications. Make sure to check with before consuming barley tea when pregnant or taking .