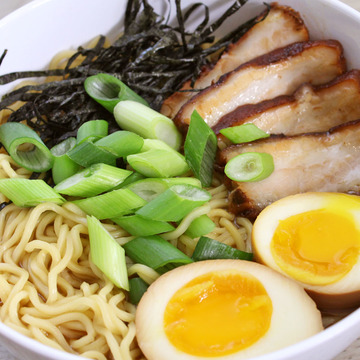 You often see four basic ramen categories:  Shio, Tonkotsu, and Miso. But none has the regional variation like Shoyu ramen. Shoyu ramen consists of broth, sauce, flavored oil, noodles, and toppings. The sauce is made up of mainly soy sauce and some other ingredients.  Soy sauce or Shoyu (in Japanese) encompasses many subilties based on which region of Japan you are eating ramen.

Shoyu ramen is a light soup broth, which is a nostalgic and familiar taste for Japanese people. Because of this, shoyu is the prototype for the different types of ramen in Japan. Comparted to Tonkotsu (which is a bone broth and cloudy) Shoyu can have subtleties based on the region of Japan and local ingredients that are readily available.

Clear and dark, this broth is usually made from chicken or clear pork broth. Japanese soup stock typically is also made up with various vegetables, konbu (kelp), or niboshi (dried sardines) and adds depth of flavor or “umami” to the soup.

Asahikawa ramen is characterized by its soy sauce-based broth filled with thin, hard, and wavy noodles. The broth is typically flavored with kelp, anchovies, pork bones, and chicken, and some of the most common toppings for Asahikawa ramen include pork, bamboo shoots, eggs, and spring onions.
In order to counter Hokkaido’s cold weather, lard is usually added to create an oily layer which prevents the ramen from cooling down too quickly. Interestingly, on the city’s outskirts, there are 8 famous ramen shops located beside one another, called Asahikawa Ramen Village.

Kitakata ramen comes from a little town that is outside of Tokyo with only 50,000 residents. The origination comes from its wavy chinese style noodle. So what actually is it? The essential base is a soy-sauce soup, as historically soy sauce was readily available from the many storehouses around the town. Niboshi (sardines), tonkotsu (pig bones) and sometimes chicken and vegetables make the stock. Typical toppings are chashu, spring onions, fermented bamboo shoots, and sometimes naruto, a pink and white swirl of cured fish cake.

Tokyo ramen is the pure Shoyu ramen.  The unique quality of Tokyo ramen broth-never comes to a boil. The sauce is a combination of soy sauce and Japanese-style soup stock. Common toppings are chashu, menma, green onion, a boiled egg, and nori (dried Japanese seaweed).

Want to try these regional-specific ramen? WE can help! We have both Umami Shoyu and Shoyu Soy Sauce variations. Both have fresh noodles from Japan that are soft and non-fried for a restaurant-style experience.

You can try making the different variations of Shoyu in the comfort of your own home! Check out these recipes today! >>LEARN