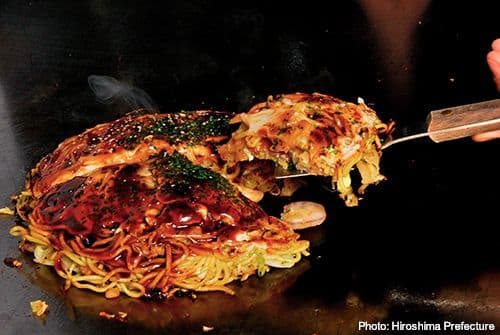 There are many great uniquely culinary dishes to try in Japan. One of Japan’s most famous delicacies is okonomiyaki, known as a kind of “Japanese pancake”. There are a few different styles of Okonomiyaki.

It’s a savory Japanese dish contains a variety of ingredients, fresh vegetables, and spices that differs by region. The name okonomiyaki is kind of like the dish- “okonomi” (meaning “whatever you like”) and “yaki” (meaning “grilled”). Think of it as a special sauce with a mix of any ingredients, grilled on a special griddle.

The Styles of Okonomiyaki Explained

The main simple difference between styles of Okonomiyaki is layered versus mixed.

Let’s Mix it Up, Osaka Style!

The Osaka-style Okonomiyaki is cooked by mixing all the ingredients such as eggs, shredded cabbage, and flour. You pour the mixed batter onto the hot pan and create a round shape. It usually comes with seafood or meat toppings and this is grilled separately on the pan. Then you can flip the okonomiyaki onto the meat or seafood topping, and then finally add sauce, mayo, and other toppings. Typically, Osaka-style Okonomiyaki restaurants have grills on each table, and the customers make their own Okonomiyaki.

Hiroshima style generally contains about 11 layers which consist of various types of vegetables, moderate portions of protein, a decent layer of carbs, and a few layers of extra flavor. And each layer brings its own flavor and texture to the table, it’s the famous Okonomiyaki sauce that brings them all together.
Hiroshima-style okonomiyaki has a few distinguishing features compared to the more widely known Osaka style.
For one, each ingredient has its own layer. Therefore keeping each layer in order during cooking and merging all layers requires more attention and a little extra dexterity from the chef.
Second, the Hiroshima style uses a whole lot more cabbage. And third, there’s a layer of grilled noodles!
Watching masterful chefs preparing Hiroshima-style okonomiyaki behind the teppan grill adds to the dining experience. Keep in mind that the best seats in the house are right at the counter!

What exactly is in that “secret” Okonomiyaki sauce? (お好み焼きソース)

Restaurants and vendors making Okonomiyaki will either have one or two different answers. The first is “its a family recipe” – which means we won’t tell you. The other answer will be simply that they use a ready-made sauce.

Typically the sauce gets its flavor from what is essentially: ketchup, oyster sauce, Japanese Worcestershire sauce (as its less sour, and milder- has vinegar, chili, tamarind, and garlic notes), and sugar to taste. All of these ingredients give you the savory-sweet umami profile your tastebuds crave and what makes Okonomiyaki so popular.

LEARN HOW TO MAKE YOUR OWN OKONOMIYAKI & SAUCE HERE >

How Do You Eat Okonomiyaki?

Now for the fun part! Everyone gets their own “hera” (That’s Japanese for a miniature spatula) with each okonomiyaki. Imagine a grid of 1″ or so squares and use the hera to chop up the portions for easy eating. Don’t cut it like a pizza, or cake- you won’t be able to eat it!
The smaller pieces of the okonomiyaki make it easier to eat,or, trade and share pieces with friends! For those not as daring, you can eat the okonomiyaki with Ohashi (chopsticks) or a fork.

Make Okonomiyaki at home with our authentic mix!